When the lubricating oil film is broken, the hub peak on the surface of the shaft diameter will also scratch the bearing bush, resulting in many linear scars, which is also two-body abrasive wear.Damage Types in Plain Bearings

Hard particles are embedded into the surface of bearing bush and fall off again, resulting in point scars and scratches.Damage Types in Plain Bearings

Most of the above particles are iron powder and sand.Damage Types in Plain Bearings

Scratching leads to the surface roughness of the friction pair, which reduces the bearing capacity of the lubricating oil film, and forms new hard particles and hub peaks that can scratch the friction surface, resulting in a vicious cycle.Damage Types in Plain Bearings

The wear scar of abrasive particles is also linear, and the direction is also consistent with the movement direction of shaft diameter.Damage Types in Plain Bearings

In case of edge contact, lack of lubricating oil or oil film rupture, severe abrasive wear will occur. Abrasive wear will lead to the change of shaft diameter and / or bearing bush geometric size and shape, loss of accuracy and increase of bearing clearance, which will sharply degrade the performance of sliding bearing before its expected life.

When the lubricating oil film is broken or lack of oil, the large friction coefficient leads to a large amount of friction heat and the bearing temperature increases. At high temperature, the low melting point metal on one friction surface adheres to another friction surface due to softening.

With the shear effect formed by the rotation of shaft diameter, the adhered metal separates from the original surface and transfers to another friction surface, resulting in obvious pits and convex scars on the friction surface. This damage belongs to adhesive wear.

When manufacturing the bearing bush, if the binding force between the lining and the backing is insufficient or poor, the material of the local lining will be stripped off from the bearing bush under the action of load during the operation of the bearing. Peeling is similar to fatigue peeling, but the periphery of fatigue peeling pit is irregular, and the periphery of peeling pit caused by poor combination is relatively smooth. 6. Corrosion

The lubricating oil is constantly oxidized in the process of use, and the oxidation often produces weak organic acids. It is corrosive to the bearing materials, especially the lead of cast copper lead alloy. Its characteristic is that the lead falls off in a dot shape, making the surface rough.

Strong inorganic acids are more likely to corrode the surface of steel journal.

After the tin in the tin base bearing alloy is oxidized, a black hard covering layer composed of SnO2 and SnO is formed on the surface of the bearing bush, and the hardness is in the range of 200 ~ 600hs. This coating is extremely harmful to the bearing. It is very hard and can scratch the journal surface and reduce the bearing clearance. 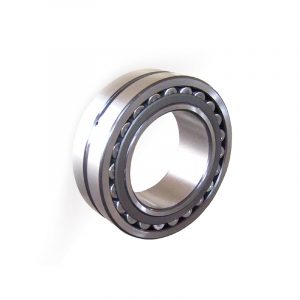 Cavitation is the form of surface damage caused by the contact and relative movement between solid surface and liquid.Damage Types in Plain Bearings

When the lubricating oil is in the low-pressure area of the oil film, bubbles will form in the oil. After the bubbles move to the high-pressure area, the bubbles will collapse under the action of pressure, which will produce great impact force and high temperature at the moment of collapse. Under the repeated action of this impact force, the material will fatigue and fall off, resulting in small pits on the friction surface, and then develop into sponge scars.

On the joint surface of liner and backing, bearing bush and bearing pedestal, due to the combined action of micro vibration (slip) and oxidation between metal surfaces, three forms of composite wear, namely adhesive wear, oxidation (corrosion) wear and abrasive wear, are formed, which is called fretting wear, which will cause point scars on the joint surface.